A look at Split and the surrounding area

A look at Split and the surrounding area.

Split is Croatia’s second city (after the capital Zagreb). With a population of around 200,000, it is probably best known for the glorious old city and the palace of Roman Emperor Diocletian (both UNESCO heritage listed) along with its football team, Hajduk Split. Due to the location in the middle Dalmatia region it has always been a major hub, and has the busiest ferry port connecting the whole of the Croatian coast and across to the islands of Solta, Brac, Hvar, Korcula, Vis and more. While people used to tend to pass through Split, that has all changed and in the past few years, it has become one of the most sought-after places on the Croatian coast for a holiday. 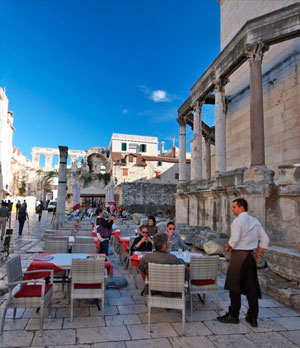 The addition of new stylish villas and hotels, the arrival of eclectic and cool restaurants and wine bars and a complete revival of the boutique shopping scene, plus excellent flight options have all resulted in the boom in visitors to Split and the surrounding area. Visit in May, June, early July or during September and October and there will be fewer crowds than in high season.

The Riva (seafront) is a wide tree-lined boulevard (no cars) with a real “Mediterranean Riviera” feel. Many visitors say that it reminds them of the French Riviera and there are numerous cafes where people sit outdoors both people and boat watching.
There is a buzzing restaurant scene from trendy tapas-wine bar type places to fine dining spots.

Split and the surrounding area is a fantastic place as a base with some superb day trip opportunities: to famous Dubrovnik further south, to the nearby islands of Solta and Brac, to the Krka National Park (with its tumbling blue cascades) and even over the border to historic Mostar in neighbouring Bosnia-Hercegovina (passport needed). Trogir, the small walled town to the north of Split is easily visited by boat or road from downtown Split.

When people talk of the “Split Riviera” they usually mean the area from Podstrana six kilometres to the south of Split to Primosten, 27 kilometres to the north.
Podstrana is now a small resort but was once five small villages. It has some lovely pebble beaches with good bars right on them for candle-lit cocktails after sunset. Croatia is not a golfing haven but near here is the small Golf Club Split 1700 with just six holes and a driving range. Clubs can be hired. The owner’s dogs may walk with you!
Primosten was once an island connected by a bridge and then later by soil addition. Aerial photos clearly show the almost fish-like shape of the place. There are pretty narrow streets in the old town and some stunning churches. One of the best beaches in this region is Raduca beach. 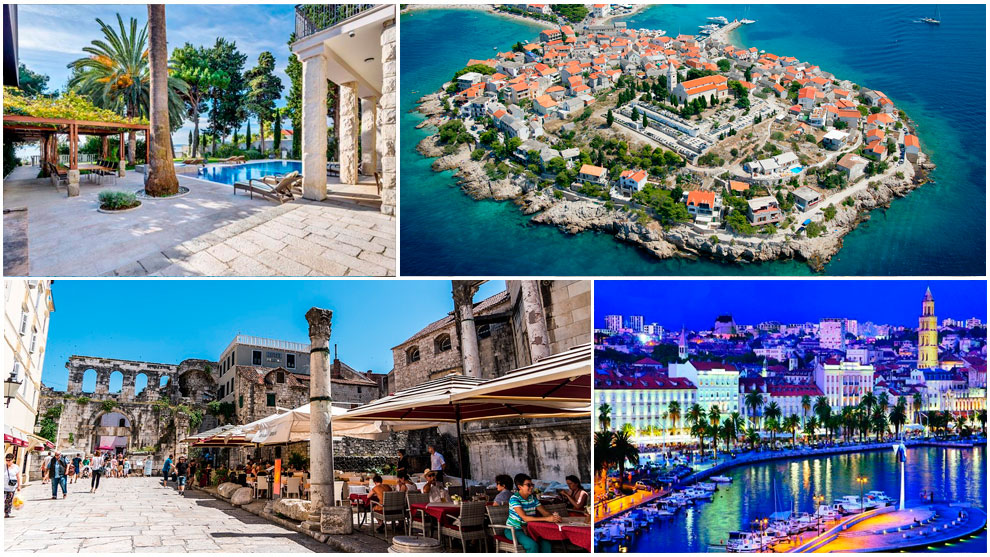 Between Split and the airport is the town of Kastela. The eastern part is now industrial and does not look appealing but wander into the seven smaller places of Stafilic, Novi, Stari, Luksic, Kambelovac, Gomilica and Sucurac (all prefixed by Kastel on guides) and you will find some exquisite towers and tiny fortresses right on the sea which protected the place from attacks by the Turks.

Along the coast at resorts there are good water sports, including seakayaking and the canoe safari excursion to the river Zrmanja, a great day out with rest and swimming stops too.

Inland, modern day Solin was ancient Salona and just north east of Split (easy by local bus or excursion). Here lie the ruins of the ancient city of Salona and this is one of the biggest archaeological sites in Croatia. The Roman ruins clearly show the massive ancient amphitheatre, burial places, thermal baths and aqueduct. It was mostly destroyed in the 6th century by invading Avars and Slavs. 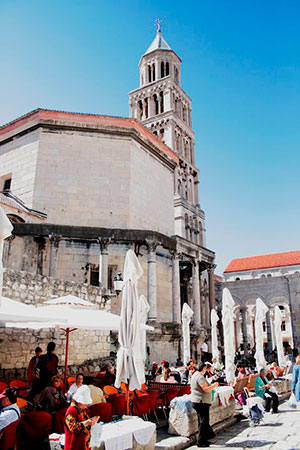 Back to Split itself, there is plenty to see and do. In addition to the previous places mentioned, there is a growing number of excellent wine tasting tours (some even offer cookery classes) often with focus on the Plavac Mali grape. DNA tests a few years back have proven that the version of the grape found in vineyards near Split airport is actually the origin of the Californian Zinfandel grape, with vines thought to have been taken to America by emigrants.

From mid July to mid August, Split’s summer festival has everything from music, theatre, dance, often with opera performed within Diocletian’s Palace. Round the corner at Bacvice is a rare sandy beach where the local game of “picigin” can be watched. Locals play in shallow water with a small ball – and they do it year round too! To the west of the city is Marjan hill, a wooded area with some lovely stone and pebble beaches and some good waterfront restaurants.

The Dalmatia region is all about traditional heritage and in all of the above mentioned places you will find performances of klapa (a capella male choir), traditional fishermen’s nights with food stalls and live music by the waterfront (usually Friday or Saturday in summer) and Dalmatian folk music events.

Split is the perfect blend of ancient and modern, a place that feels alive and now attracting visitors from all over the world. The location is superb for day trips and excursions nearby.
As we have heard it said “it is time to split in Split!”