Croatia’s rich history means that visitors can see wonders of heritage and the country’s past during their holiday. From early tribes, through the Roman period, Ottomans, Austro Hungarian… all have left their mark.

Dubrovnik City Walls – were built between the 13-16th centuries to fortify the city and have survived earthquake and attack. In places they are six metres thick. Everyone who comes to Dubrovnik visits the famous ramparts. Allow at least one hour to do the whole two kilometre circuit. Fabulous views. Ticket office inside the old city at the Pile Gate end.
Tip – the entrance ticket also allows entry into the detached Lovrjenac Fort. Worth visiting (and the 100 or so steps up) for different views of the old city. 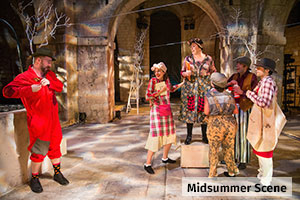 A Midsummer Night’s Dream will be performed on Lovrjenac as part of “Midsummer Scene” from 20 June- 4 July (not 26 June) in English, a co-production by Honey-Tongued Productions, London and Brilliant Events, Dubrovnik. Shakespeare would have loved it!

Diocletian’s Place, Split – when Roman Emperor Diocletian chose the location for his retirement villa, he chose carefully. Facing the harbour this is one of the most imposing Roman ruins in existence. Nowadays, the palace is a busy place not a museum and is the living heart of the city. Built from stone from the island of Brac, construction lasted 10 years. Marble was imported from Italy and Greece and columns and sphinxes from Egypt. There are four gates and over 200 buildings within the palace boundaries including apartments, shops, restaurants, museums. UNESCO listed site.
Tip – at sunset on most summer days (and always on Fridays and Saturdays) there are informal performances of klapa in the Peristil area of the palace. Local men singing a capella, best watched sitting outside at Cafe Luxor. 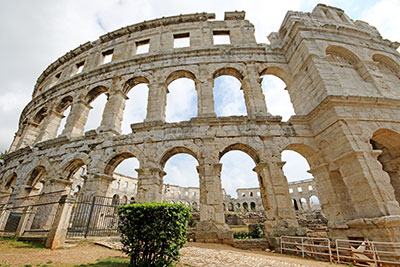 Roman Amphitheatre, Pula – the city’s most famous sight, the 1st century amphitheatre is the third largestin the world after the Coliseum in Rome and El Djem, Tunisia. This is no ruin and is completely intact. It hosts many events and there is an excellent small museum beneath the structure which explains the developments of the Romans (and their olive oil production) in the region.
Tip – watching a performance is magical as the sun turns red through the arches. Performances usually start at 9pm in summer and this year there are various classical concerts plus Elvis Costello & The Imposers (8 July), Charles Aznavour, yes, aged 94! (16 August), Kraftwerk, opening of Dimensions Festival (30 August at 7pm). 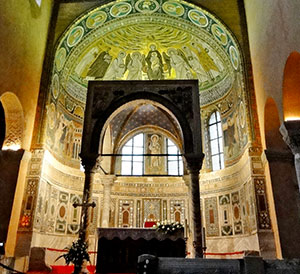 Euphrasian Basilica, Porec – the 6th century basilica is a UNESCO world heritage site and has been well restored. The sacral complex includes a church, an atrium and a baptistery with a glittering wall of mosaics in the apse. Climb up to the belfry for views.
Tip – between May and October there are frequent classical music events in the Basilica complex. Pianists, strings groups and singers including operatic events. These are usually advertised at fairly short notice. Look out for local posters or drop in at the local tourist office. 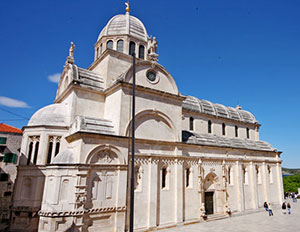 Sibenik – Cathedral of St James is a UNESCO listed site, famous for a triple nave and remarkable frieze decorated with 71 sculptures. In 2017 St Nicholas Fortress also became UNESCO listed, set high up above the city and built in the 16th century to protect against Ottoman invasion.

Ston – walls and salt pans. Under 60 kilometres north west of Dubrovnik, the stone walls of Ston are often referred to as “the European Wall of China”, originally almost 8 kms long and now 5.5 kms long with 40 towers still intact. Energetic visitors can participate in the Ston Marathon on 12 September this year (2018). Built in the 13th century to protect the very valuable salt harvest. The salt pans are the oldest in Europe and date back to Roman times (Solana). At one time, salt was more valuable than gold and the traditional harvesting method has remain unchanged.

Nasectium near Pula – has the ruins of settlements of both the local Histri tribes and the Romans. A fascinating place located about two kilometres on the road beyond Pula airport. Each year there is an open air theatre performance (in English) depicting the battle between the Histri and the Romans – expected to be 10 or 11 August this year (2018).

Island of Hvar, Stari Grad – on the north coast of the island, Tvrdalj (also called Peter Hektorovic’s house) is a beautiful 16th century fortified castle. The distinct feature is the leafy fish pond fed direct from the sea and reflecting the poet’s love of fish and fishermen.

Island of Krk, 900 Years of Frankopans – this Kvarner island is celebrating the 900 years anniversary of the Frankopans, a noble family that played a leading role in Croatian history with key historic legacies on this island. Events are taking place in Krk town in the Frankopan Castle with corner towers dating from 1191. Worth considering is Frankopan Weekend over 15/16 September 2018 when there is a fashion show featuring fashion of the period and gourmet food events detailing preparation of food and wine from the Frankopan period. Krk is connected by bridge to the mainland.

Brijuni Islands, Istria region – near Pula and accessed from the charming village of Fazana, these 14 islands are one of Croatia’s seven national parks. Visit Veliki Brijun (boat takes 15 minutes) and seek out Verige Bay, site of a sunken Roman settlement where visitors can swim in shallow water and pick up a Roman tile from the seabed, from the original settlement.

Croatia is a beautiful country with a fascinating history. It is worth seeking out some of the sites both the famous ones and the less well known.